The EPA knows, but they're not telling.
Just when you think you've seen it all,
ther corporate controlled government
amazes with the depths of its depraved
corruption.
One of the most important news items
ever run.
Share this one please - widely.
Will we ever see it in the mass media?
Well not unless we keep demanding real news and not pap, celebrities and propaganda!
Then look up 'Clothianidin'

Link it to Bayer who use it as a pesticide on canola and corn seed – well until it gets banned for killing bees etc.


Data 121081201009:49 AM
From Jay Feldman
To lisaP Jackson/DC/USEPAlUS@EPA
ce
Subject Request Lener
Message Body
Full text of request letter from National Honey Bee Advisory Board,
American 8eekeep~ng Federation, American Honey Producers Association,
Beyond Pesticides. Pesticide Action Network No~h America, and Center for
Biological Diversity is attached.
Dear Admlnistrator Jackson:
In light of new revelations by your agency in a November 2, 2010 memorandum
that a core registration study for the insecticide clothianidin has been
downgraded to unacceptable for purposes of registration, we are writing to
request that you take urgent action to stOp the use of this toxic chemical.
Clothianidin 1S a widely used pesticide linked to a severe and da-~gerou8
decline in pollinator populations. As ~e are sure you appreciate, the
failure of the agency to provide adequate protection for pollinators under
its pesticide registration program creates an emergency with im~inent
hazards: Food production, public health and the environment are all
seriously threatened, and the collapse of the co~~ercial honeybee-keeping
industry would result in economic harm of the highest magnitude for U.S.
agriculture.
Best regards.
Jay Feldman

But it seems The EPA still permits Bayer to market and use this product despite the catastrophic effects on the environment!

Either way 1,000 Redwings died of internal haemoraging in one town and 500 in another - 83,000 fish died in one river and 96% of all of 4 species of pollenating bees have been erradicated in America. 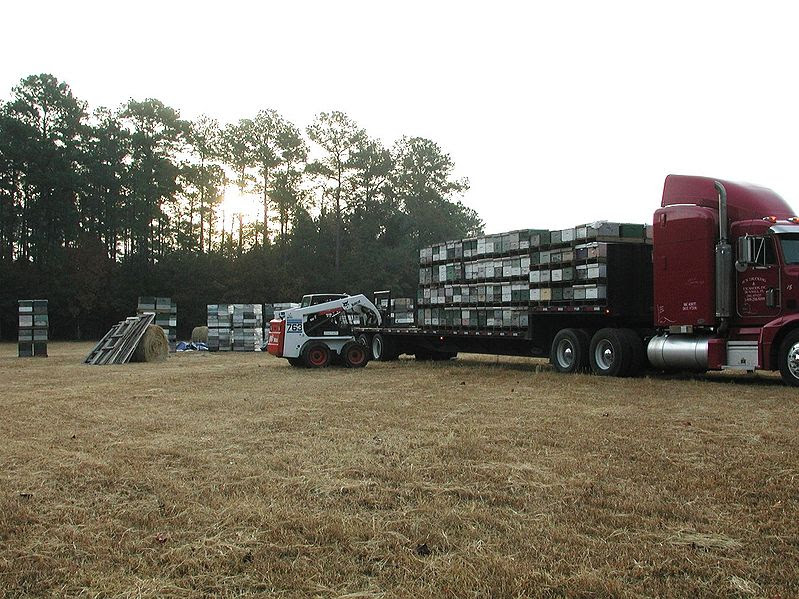 THINK how important Bees are
here they are being loaded in South Carolina
to Maine to pollenate
The Blueberry Crop for production.
The EPA have no clear answers but let us remember the list of Countries that have banned the use of this chemical! I wonder why!!!!

Howmany other useless QUANGOs and NGOs turn a blind eye to our destruction for 'expediency' - or might that be money!!

Think of Monsanto who I personally believe to be a corporation with no more morality than the many cigarrette companies who have lied and cheated to keep marketing their products long after they PROVED that they accounted for more deaths between them than Hitler, Stalin & Mau put together.

One is forced to wonder just what was behind the slaughter of so many in Libya by NATO as with Iraq we KNOW it was an attempt to restore The US Dollar as the reserve currency of choice for oil trading world wide, which was under threat by the deals Sadaam Hussein was making clandestinely with France!

Please Be Sure To
.


To Spread The Facts World Wide