Bullet fired at officer 'belonged to police',
fuelling fury about shooting of father-of-four
By Rebecca Camber
Last updated at 11:34 PM on 7th August 2011 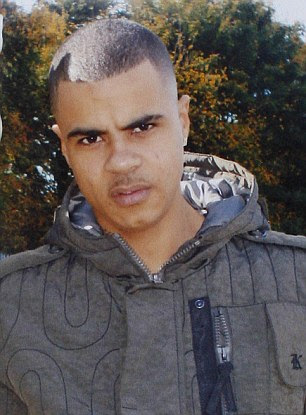 Mark Duggan:
The bullet which he was thought to have fired at the police
in fact probably came from the police themselves
The bullet which lodged in a police officer’s radio in the gunfight which led to Mark Duggan being shot dead was police issue ammunition, it was reported last night.
The revelation will fuel the fury in Tottenham about the killing of the father of four by armed officers.
The bullet which was found lodged in the radio of one of the officers at the scene is still undergoing forensic tests. It was initially suggested by the Independent Police Complaints Commission (IPCC) that Met officers returned fire after someone in the minicab opened fire.
But sources have said the first ballistics examinations suggested it was police issue.
These are very distinct as the Metropolitan Police uses hollowed-out bullets designed not to pass through an object.
The news has undermined suggestions that there was an exchange of fire between Mr Duggan and the police before he died.
Yesterday the IPCC was forced to deny reports that Mr Duggan was ‘assassinated’ as rumours spread like wildfire on the internet that he was unarmed, having put his gun down on the ground when he was shot.
Mr Duggan’s brother’s Shaun Hall said he would never have shot at police, saying it was ‘utter rubbish’.
‘My brother’s not that sort of person,’ he said. ‘He’s not stupid to shoot at the police, that’s ridiculous.’
Mr Hall said he did not condone the rioting. ‘I know people are frustrated, they’re angry out there at the moment, but I would say please try and hold it down. Please don’t make this about my brother’s life, he was a good man.

Sadly it does look all to likely that this is just yet another police murderand subsequent complacency which has led to angry responses which seem justified.

Whatever the truth the one thing I believe we can count on is that the police will obfuscate the truth and no police officer will ever be charged with this murder or held responsible for the subsequent Tottenham riots.