Rather overshadowed by events at the Conservative Party conference in Manchester last week was a line in George Osborne's speech which could mark the start of a long overdue political transformation in Britain.
The Chancellor acknowledged that a decade of environmental laws had been piling unnecessary costs on households and companies, adding that Britain was not going to save the planet by putting ourselves out of business.
He was referring in particular to the Climate Change Act, famously passed by the House of Commons in October 2008 by 463 votes to three, even as the snow was falling outside. By the Government's own estimate, it would cost £404 billion to implement – £760 per household every year for four decades. 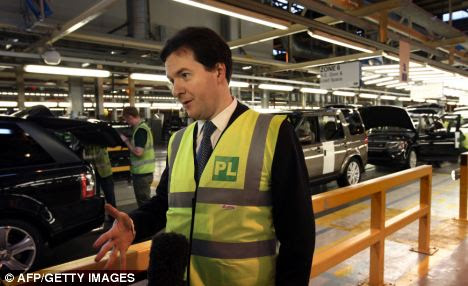 Converted: Chancellor George Osborne has pulled back from the 'green abyss'


The Act included a voluntary commitment to reduce Britain's carbon dioxide emissions to 80 per cent of their 1990 level by 2050 – a target generally acknowledged to be achievable only by shutting down most of the economy – in an effort to demonstrate 'global leadership'.
The lunacy of this commitment can be demonstrated by the fact that neither China nor the US – who together produce 40 per cent of global emissions compared with our two per cent – are committed to such draconian reductions.
Instead Mr Osborne suggested last week that we follow the EU, whose members agreed in March 2007 – as one of Tony Blair's final acts of hubris – to a 20 per cent emissions reduction by 2020. The European Commission is still discussing a 'road map' for its 2050 target, putting the UK at a huge competitive disadvantage.
But while Europe is taking a relaxed view of climate change, Britain seems to have excelled in devising more and more bizarre ways of bankrupting the nation.
In December 2008 the Government's Committee on Climate Change, chaired by Lord Turner of Ecchinswell, recommended that we should switch from eating beef and lamb to 'less carbon-intensive types of meat'.
Within 11 years, the committee said, it wanted to see 40 per cent of all the cars on Britain's roads powered by electricity. That very week it was reported that in the first ten months of 2008 just 156 were bought, fewer than half the 374 in the same period of 2007. That made a grand total of 1,100 on the road in Britain.
It also insisted no more coal-fired power stations should be built unless they could be fitted with 'carbon capture', funded by a levy on energy bills which would raise £3 billion from hard-pressed consumers. 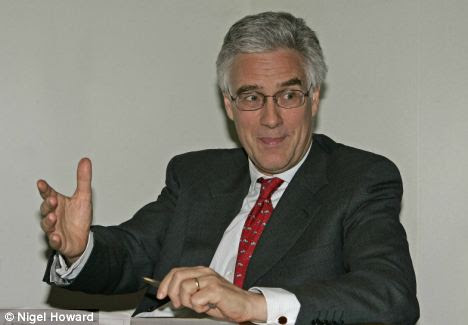 Lobby: Lord Turner of Ecchinswell was part of a group of MPs who recommended we switch from eating beef to lamb

The overall effect of the unproven and probably unworkable technology to effectively bury carbon dioxide underground would be to double the price of electricity and make us even more dependent on Russian and other imported energy, which already supplies 70 per cent of our needs.
Nevertheless, a mad and ruinously expensive scheme was launched on the European stage. Industries should pay for using fossil fuels, through a 'tax' paid on each ton of carbon dioxide produced. Each company would have to buy certificates, known as 'European allowances' or 'carbon credits' – each representing a ton of carbon dioxide – with surpluses traded as a commodity.
Each year, the total would be reduced and commercial firms, hospitals and even Government offices would have to compete on the open market for enough certificates to enable them to operate.
The theory was that competition for a dwindling supply would force energy users to be more efficient. Instead, commercial users passed on the costs to their customers, with electricity prices rising for the average consumer by as much as £300.
Tens of thousands have been pushed into fuel poverty. Firms that could not pass on their costs moved abroad. Huge tranches of the aluminium industry have disappeared, one major firm having moved to the Emirates in October 2009 – taking 300 workers from Anglesey who had to follow to keep their jobs. 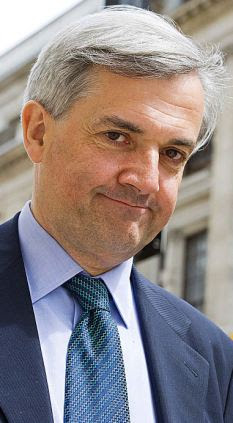 Pro green: Chris Huhne said he wanted to go 'further and faster' when he was Energy Secretary

The madness didn't stop there. In February 2010, Gordon Brown's cash-strapped Government spent £60  million on 'carbon credits' for Whitehall and other Government offices in the UK, as well as British Nato bases in Europe.
Thus while troops were going short of kit in Afghanistan, the defence budget was being raided to buy carbon certificates.
When he became Prime Minister, David Cameron carried on the theme, promptly declaring that he wanted the Coalition to be 'the greenest Government ever'.
His new Energy and Climate Change Secretary Chris Huhne added that he wanted to go 'further and faster than ever before'. Then it was announced that Britain, uniquely, should set a minimum price for carbon credits, instead of allowing the market to decide.
Known as the 'carbon floor price' the idea was that firms such as electricity generators would pay £16 per ton of carbon dioxide produced – compared to a market rate of £9 – with the price rising to £70 by 2030.
Announced by Mr Osborne in June's budget, the Institute for Public Policy Research immediately warned that the policy would cost British industry at least £1 billion and drive manufacturers offshore, while pushing down the price of European permits, giving our EU competitors a generous gift.
And last week, even as Mr Osborne was standing up to deliver his speech in Manchester, Davin Bates, a management accountant at one of Stoke-on-Trent's remaining successful potteries, was preparing to tell the world how spiralling energy costs – artificially inflated by 'green' levies and taxes – were driving energy-intensive companies like his out of the UK.
Particularly affected is the chemical industry, which contributes £30 million a day to the British economy. Major chemical multinationals are now looking to move production to places such as South Africa, India and China. There, under a global carbon credit scheme, we actually subsidise them by giving them credits – which they then sell back to our industries, making huge profits.
I haven't even mentioned the madness of the wind machines. Subsidies, paid for by consumers, make wind power three times more costly than the normal tariff electricity. But as the pull of the subsidies draws investment away from new conventional plants, the spectre of power cuts looms large.
Caught in this vice of increasing 'green' costs and subsidised competition, the manufacturing industries which Osborne hopes will lead the UK recovery simply cannot survive.
Small wonder, therefore, that he bowed to the inevitable and pulled back from the green abyss.
Many believe that Osborne's conversion is too little too late, but it is some small comfort at least, that we no longer have a Chancellor – or even a Prime Minister – keen to parade his 'green' credentials. Perhaps they are beginning to understand that, when the lights go out, all colours look the same: black.
If Britain is to pull itself out of economic crisis, Mr Osborne is going to have to go much further. At the very least, he has to lift this senseless raft of green taxes from industry and the electricity generators.

Read more: http://www.dailymail.co.uk/debate/article-2046961/RICHARD-NORTH-How-climate-change-zealots-wrecking-industry-country-possesses.html#ixzz1aHviKIxk
"In politics, stupidity is not a handicap."
Napoleon Bonaparte (1769-1821)

Please Be Sure To
.