students seem not alone in completely overlooking the FACT that the Lib.Dims. were not elected to Government in fact they hold a tiny number of seats and sold out any principle they may pretend to in return for acting as ballast for the Tory Party which held the most seats. 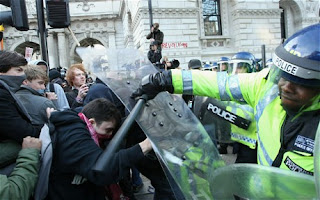 Did you REALLY believe Nick Clegg would deliver ANYTHING other than betrayal?
Do not forget he is a complete sell out - having held the position of Massively Expensive Parasite as an MEP giving credibility to the undemocratic, corrupt, profligate centralised and undemocratic EU for many years.

Further do realise the Lib.Dims. have always espoused sell out to direct rule by the malign EU and ensuring that Britain dumps control of its currency and surrenders the £ to the control of the ECB YET poll after poll shows Lib.Dim. voters by majority wish to retain the £ and value our Democracy.

Clearly Clegg is, if not dishonest, at very least corrupt - you will note Nick xclegg has never pointed out to British peoples that he is utterly irrelevant as is every single MP - Do read The EUropean Communities Act and The New Constitution in the form of The Lisbon Treaty which was authorised by Tony Blair & signed by Gordon Brown without ANY meaningful opposition from a single domestic politician - even UKIP did not raise a finger to oppose the final sell out to EU direct control of Britain!

Yes Clegg misled you - are you surprised or is it his irrelevance that surprises you?