In 1895, British poet and author Rudyard Kipling - the man who wrote The Jungle Book in 1894, giving us characters such as Mowgli and Shere Khan - wrote a poem about the hellish conditions British troops face in Afghanistan.

Now, just like in the 19th Century, British soldiers are fighting a war in Afghanistan again.

So an unnamed British soldier has written a poem, based on Kipling's 1895 classic, about life in the British Army on the frontline in Afghanistan, and has made its rounds on the internet. 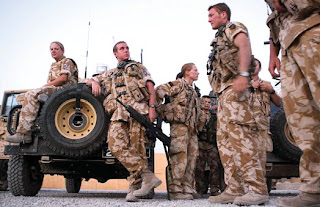 A BRITISH squaddie fighting in Afghanistan has re-written a famous Rudyard Kipling poem as a damning attack on a soldier's lot today.

The anonymous serviceman based his words on The Young British Soldier - written by Kipling in 1895 about the hellish conditions our troops had to deal with in 19th century conflicts in Afghanistan.

The squaddie's new poem - dubbed Afghanistan (With Apologies To Kipling) - shows that little has changed, with soldiers having to contend with poor pay, equipment shortages and slum homes as well as the enemy.


Rudyard Kipling (1865-1936), a British poet and author, wrote a poem in 1895 about the hellish conditions British troops had to put up with in Afghanistan

It refers to a "Gimpy" - GPMG or general purpose machine gun & "Gimpy" lives on a diet of sand and jam! - and "arty", slang for artillery. "Arty" may well be of a London Regiment as of 'Artful Doddger' so useful with 'short fall'!

The poem was first posted on the internet and met with widespread military aproval as it is 'e'mailed widely.

One Army officer just back from Helmand Province said: "Whoever this bloke is, he's got it spot-on. He has summed up everything we're feeling.

"It shows that nothing much changes for us over the centuries."

The Somerset Light Infantry didn't much enjoy their visit to Khabul either!

My Grandfather didn't much like it either, when marched up into The North West Frontier from Afghanistan after Mesopotamia, in 1919 at the end of WWI, having been 'An Old Contemptible'! He told my Grandmother in 1914 he would be home by Christmas! He refused ANY promotions on the grounds he was no better than all his friends who were now dead!


Afghanistan (With apologies To Kipling), by an anonymous British soldier

When you’re lying alone in your Afghan bivvy,
And your life it depends on some MOD civvie
When the body armour’s shared (one set between three),
And the firefight’s not like it is on TV,
Then you’ll look to your oppo, your gun and your God,
As you follow that path all Tommies have trod.

When the gimpy has jammed and you’re down to one round,
And the faith that you’d lost is suddenly found.
When the Taliban horde is close up to the fort,
And you pray that the arty don’t drop a round short.
Stick to your sergeant like a good squaddie should,
And fight them like satan or one of his brood

Your pay it won’t cover your needs or your wants,
So just stand there and take all the Taliban’s taunts
Nor generals nor civvies can do aught to amend it,
Except make sure you’re kept in a place you can’t spend it.
Three fifty an hour in your Afghani cage,
Not nearly as much as the minimum wage.

Your missus at home in a foul married quarter
With damp on the walls and a roof leaking water
Your kids miss their mate, their hero, their dad;
They’re missing the childhood that they should have had
One day it will be different, one day by and by,
As you all stand there and watch, to see the pigs fly

Just like your forebears in mud, dust and ditch
You’ll march and you’ll fight, and you’ll drink and you’ll bitch
Whether Froggy or Zulu, or Jerry, or Boer
The Brits will fight on ‘til the battle is over.
You may treat him like dirt, but nowt will unnerve him
But I wonder sometimes, if the country deserves him.

First mind you steer clear o' the grog-sellers' huts,
For they sell you Fixed Bay'nets that rots out your guts --
Ay, drink that 'ud eat the live steel from your butts --
An' it's bad for the young British soldier.
Bad, bad, bad for the soldier . . .

When the cholera comes -- as it will past a doubt --
Keep out of the wet and don't go on the shout,
For the sickness gets in as the liquor dies out,
An' it crumples the young British soldier.
Crum-, crum-, crumples the soldier . . .

But the worst o' your foes is the sun over'ead:
You ~must~ wear your 'elmet for all that is said:
If 'e finds you uncovered 'e'll knock you down dead,
An' you'll die like a fool of a soldier.
Fool, fool, fool of a soldier . . .

If you're cast for fatigue by a sergeant unkind,
Don't grouse like a woman nor crack on nor blind;
Be handy and civil, and then you will find
That it's beer for the young British soldier.
Beer, beer, beer for the soldier . . .

When 'arf of your bullets fly wide in the ditch,
Don't call your Martini a cross-eyed old bitch;
She's human as you are -- you treat her as sich,
An' she'll fight for the young British soldier.
Fight, fight, fight for the soldier . . .

If your officer's dead and the sergeants look white,
Remember it's ruin to run from a fight:
So take open order, lie down, and sit tight,
And wait for supports like a soldier.
Wait, wait, wait like a soldier . . .

The soldiers of The Crown stood their ground without the luxury of 'chopper insertion, evacuation or extraction.

Even today the determination of our Generals to have the best 'toys' ensures that the troops lack 'chopper cover in the main whilst the Generals & The Ministry of Defeat emasculates the army waiting for the over priced Lynx at £14M each awaited in 2014!!! The Huey and the Black Hawk are immediately available off shelf for £4>6M Right NOW.

It took not Generals nor MoD, nor even politicians the army or the meeeeja to flag up the criminal neglect of our troops putting them into a war zone with 'Snatch Land Rovers' without IED defence or armour - It took the Bloggosphere and Richard North!

If you have not read his book on the Iraq campaign defeat and evacuation from Basra may I suggest you do:

'The Minstry of Defeat' for more details CLICK HERE

‘The arrogance and hubris of corrupt politicians
will be responsible for every drop of blood spilt
in the Wars of Disassociation, if Britain does not
leave the EU.

The ugly, centralised, undemocratic supra national policies being imposed by the centralised and largely unelected decisionmakers of The EU for alien aims, ailien values and to suit alien needs stand every possibility of creating 200,000,000 deaths across EUrope as a result of the blind arrogance and hubris of the idiologues in the central dictatorship, and their economic illiteracy marching hand in glove with the idiocy of The CAP & The CFP - both policies which deliver bills, destroy lives and denude food stocks.

The EU, due to the political idiocy and corruption of its undemocratic leaders, is now a net importer of food, no longer able to feed itself and with a decreasing range of over priced goods of little use to the rest of the world to sell with which to counter the net financial drain of endless imports.

British Politicians with pens and treachery, in pursuit
of their own agenda and greed, have done more
damage to the liberty, freedoms, rights and democracy
of the British peoples than any army in over 1,000 years.

The disastrous effects of British politicians selling Britain
into the thrall of foreign rule by the EU for their own
personal rewards has damaged the well-being of Britain
more than the armies of Hitler
and the Franco - German - Italian axis of 1939 - 1945.

Until we gain our liberty, restore our sovereignty, repatriate our democracy and reinstate our Justice system and our borders - defended by our Police and Military armed with sustainable and obtainable weaponry:
Treat every election as a referendum.

Don't waste your vote on a self serving Politician in ANY election until we are liberated from the EU and are a Free Sovereign peoples, with independent control of our own borders, making and managing Law & Justice for our own benefit, in our own elected Westminster Parliament where we can fire our politicians at the ballot box, if they fail to represent OUR best interests.
Make your vote count
Write on YOUR ballot Paper
LEAVE THE EU
Posted by Greg_L-W. at 8/09/2009 04:05:00 pm